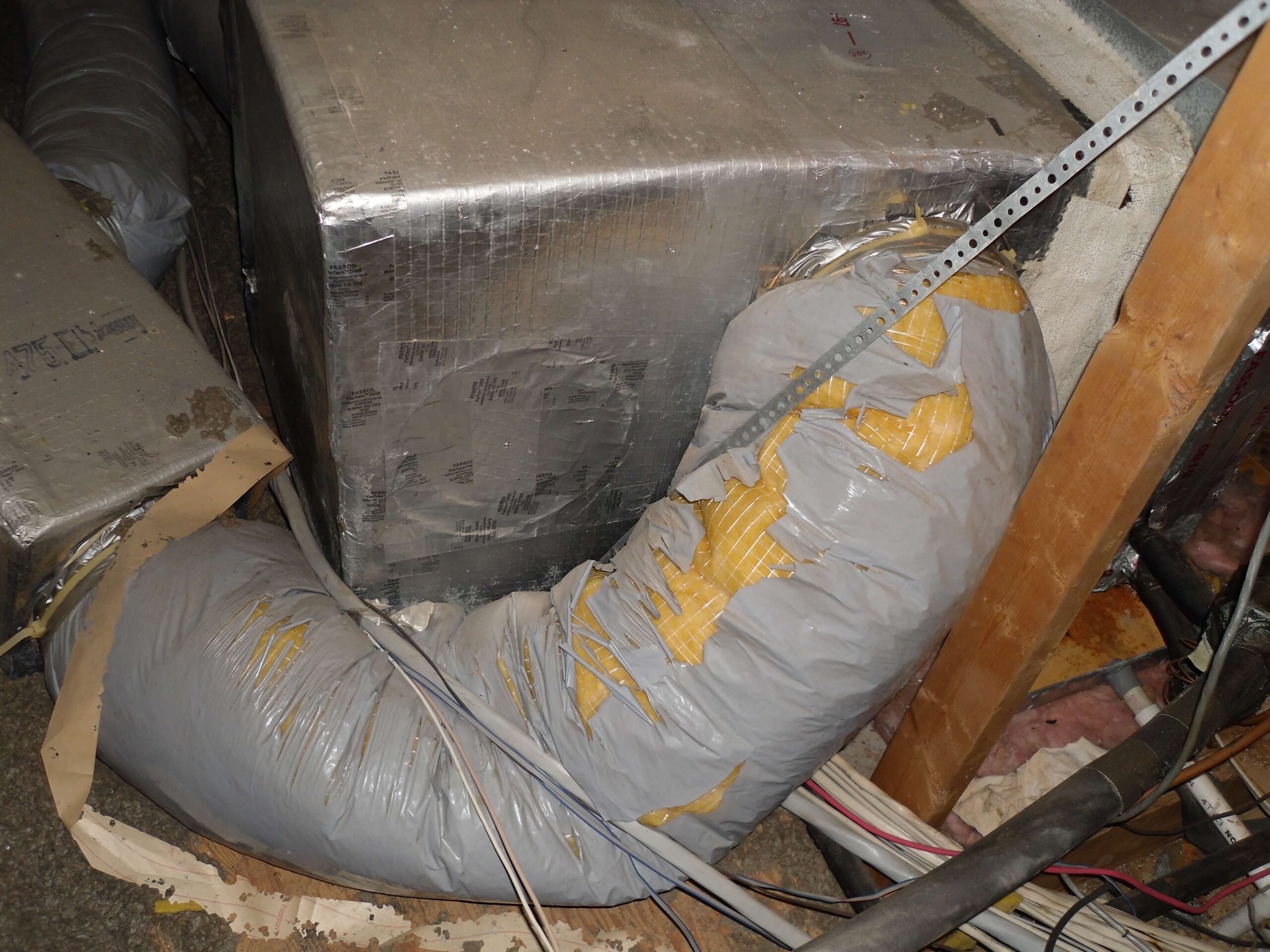 Did you know that approximately 25% of the air in your HVAC ductwork is lost as a result of leaks and poorly fitted ducts? This can translate into hundreds of dollars wasted each year. Luckily, there are solutions to this problem. You can either upgrade your ductwork or consider air duct replacement services. It is imperative to do something when it comes to the condition of your ducts before it’s too late. Keep reading to find out how to spot ductwork problems and what to do in such cases.

Why HVAC Ductwork Is So Important?

When people are considering their HVAC system, they often overlook the ducts.

If the ductwork is poorly connected or has multiple holes, air pressure is lost. This makes your HVAC system work harder which increases your energy bill.

Ducts are designed to last for about 15-20 years on average. They are made from a combination of materials such as fiberglass and plastic.

At some point, these ducts will get damaged. The sooner you see signs of damage and do something about it, the better. That’s because you avoid spending too much on your energy bill and prevent more costly repair projects.

When ducts get damaged, your comfort level will drop significantly. For example, your air conditioning unit might not be that efficient and you’ll end up with cold or hot spots in certain rooms. Obviously, you can do things to make your AC unit more efficient, but it’s important to fix the ducts first and avoid more complicated problems.

Similarly, damaged ducts can also push toxic air through the vents because of mold and mildew problems. Having your HVAC ducts maintained properly is paramount for your health and quality of life.

Here are a few important signs to look for to determine if your air ducts need repair or replacement.

Your HVAC system is designed to make noise while working, but the sound shouldn’t be annoyingly loud.

If you constantly hear rattling sounds or if the HVAC ductwork is vibrating too much when heating or cooling your house then you need to inspect the ducts.

Remember that the ducts in your house are connected using plastic or fiberglass joints. If these joints get damaged, you’ll often hear rattling or whistling sounds.

If there are holes in the ductwork, you’ll also hear loud noises when air circulates through the ducts. don’t ignore this noise because it can only get worse.

It’s normal for some air to escape when traveling through your ducts.

However, when more than 20% of air escapes, you’ll eventually see this reflected on your energy bill.

The reason is simple. You turn on the thermostat to a certain level to enjoy a warm home. The indoor temperature gets higher, but not sufficiently enough. That’s because a lot of air is escaping, so the HVAC system is inefficient.

This inefficiency is what makes you pay more for your energy bill because the HVAC system eventually has to work harder to heat or cool down your house.

If you know you haven’t installed a lot of electronics in your house recently (laptops, computers, kitchen appliances, etc) then the spike in your energy bill might be caused by leaky ductwork.

Homeowners might discover that one or more rooms in the house are improperly warmed or cooled down, in comparison with the rest of the house.

This can be caused by faulty ductwork which doesn’t send enough air to certain parts of your home.

You can easily verify this using an indoor thermometer. If the differences in temperature are clearly off the scale, you need to inspect your ducts right away. This problem might be caused because a duct has huge leaks in it. The air will escape through these leaks and it will not be able to warm up or cool down a particular area of your room.

4. Having A Dusty Home

It’s almost impossible to get rid of dust. It can be found everywhere, both indoors and outdoors.

However, if you see that there is simply too much dust in your house, this problem might be caused by damaged ductwork.

Well, dust from outside the ducts is getting inside through holes and leaks. The HVAC ductwork then carries this dust to the vents and disperses it throughout your house.

If you sneeze more often than usual, you might have a very dusty home and the culprit can be faulty ductwork. It’s important to do something about it right away, otherwise, you risk developing cardiovascular diseases.

5. Smelling Mold and Mildew in Your House

In a similar fashion, mold and mildew problems can also be caused by poorly connected or poorly insulated ducts.

Mold and mildew appear as a result of uneven temperatures inside and outside the HVAC ductwork. For example, when warm air travels through cold ducts, condensation can appear. Over a period of several weeks or months, mold and mildew can develop and you’ll smell it when the air is pushed into your house through vents.

Mold and mildew can cause a lot of health problems and they can drastically deteriorate your furniture items, so make sure that you inspect your ductwork right away if you smell mold in your house.

6. Having A Problem with Pests

Apart from mold and mildew, old and damaged ductwork might also cause a pest infestation.

This happens because of the leaks and holes in your ductwork which allows bugs and rodents to enter. These pests can easily establish colonies and cause a lot of problems in the long run.

Some of the problems caused by pest include unpleasant smells, spreading of bacteria and microbes, making weird noises in the middle of the night, etc.

On top of that, your HVAC system can also get damaged if bugs or rodents cause blockages in the ductwork. What to do in this case? Simple – just inspect your ductwork thoroughly. If you see signs of pest infestation, you need professional help to both get ride of pests and replace your ductwork.

Do you or your family members sneeze often?

How about allergies or weird coughs which are not associated with colds or flu?

Keep in mind that leaks in your ductwork can facilitate the entering of allergens such as pollen and small dust fragments.

Pollen is known to cause allergies in most people, particularly in those who also suffer from asthma problems. You should do your best to inspect the ductwork and fix leaks and holes before they ruin the indoor air quality. Other impurities which cause allergies are cigarette smoke, lint, pet hair and so on.

8. Seeing Debris Around The Vents

The vents are designed to push hot or cold air inside your house, depending on your needs.

However, if the air is too dirty, it will eventually leave small marks around the vents. This is usually done over a long period of time and you might not notice it at first.

The debris is created as a result of an accumulation of dust, dirt, lint, pet hair, even small insects. This is not only an aesthetic problem, but a surefire sign that your ductwork requires a proper inspection right away.

Ducts can get damaged or tangled for various reasons. For example, something heavy might have fallen on your ducts from storing items in the attic. This might make the duct twist in an abnormal angle and restrict airflow. On top of restricting airflow, ducts can also develop holes and leaks.

You should look for tangled or kinked ducts particularly in your attic since this is where most of the problems appear.

Having old ducts can cause problems at some point in the future.

Even if your ductwork appears to be working normally now, you never know when issues start to appear. Especially if your house was built back in the seventies and it relies on asbestos insulation (which is a cancer-causing material), you need to inspect your ducts right away.

Duct installation methods have been improved in the last years. New, more efficient and safer materials are used to install and insulate your HVAC ductwork. By not upgrading your ducts, you risk wasting money and putting your health in danger.

Get Your HVAC Ductwork Inspected Today!

Whether you want to fix some of the ducts in your HVAC system or you are considering a complete air duct replacement project, it’s important to not postpone this step any longer!

Give us a call today and let our professionals inspect the ducts in your house. We have a lot of experience when it comes to HVAC systems and our services are affordable.

Let's start the conversation about what you need.

We offer financing through AC Credit